TIMELINE TOWARDS THE ARRIVAL OF CHRISTIANITY IN CEBU HISTORICAL ACCOUNT FROM MARCH 16, 1521-APRIL 27, 1521 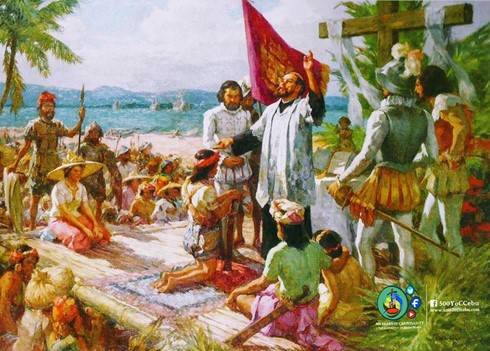 God reveals himself in history, as manifested in the accounts leading to and after the First Baptism and the initial encounter of the natives of the Philippines with the Christian faith.

The Armada de Maluco, the Spanish naval expedition led by Portuguese Ferdinand Magellan in search of the westerly route to the Spice Islands, reached the island later known as the Philippines.

The Spaniards gained foothold in Limasawa where they celebrated the First Easter Sunday Mass and planted a cross on top of the highest mountain in the area.

The three ships of Magellan: Trinidad, Concepcion and Victoria dropped anchor at the port of Cebu to obtain food provision for their continued journey to the Moluccas and to visit the king. On approaching the town, Magellan had the ships hang all their flags and the artillery fired, which greatly frightened the people of the place.

The nephew of the king, who was the prince, and other principal men came to the ship of Magellan to make peace with the Spaniards, and received a short introduction of the Christian faith, especially on honoring one’s father and mother even in their advanced years. The representatives of the king seemed to be very interested in knowing about and converting to the faith.

Pigafetta and the interpreter went to the king to ask for a place where they might bury their dead. They were given an open space in the town. They consecrated the grave and placed a cross on it. Two men were buried in the space of the same day.

Since the king was to be baptized on the coming Sunday, a platform was made in the open space, fitted with tapestry and palm branches. The captain advised the king that the cannons would be fired on that day although without firing stones or other balls.

In the morning, as Magellan and forty men when ashore, the ships discharged all their artillery. The party then proceeded to march following the standard of the Spanish king towards the platform. The captain and the king embraced one another, and then they sat on two chairs while the principal men sat on cushions and the others on mats. A large cross was set up in the square.

The captain gave a catechesis. The king was then baptized and given the name of Carlos. Fifty men were baptized in the morning. After lunch, the queen came together with forty ladies. A wooden image of Our Lady, holding her little Child, as well as a wooden cross were shown to her. After baptism, she was given the name Juana. After baptism, she begged the Spaniards to give her the image of a little wooded boy to put in the place of the idols. That day eight hundred men, women and children were baptized.

In the succeeding eight days, more natives were baptized, some from the neighboring islands. In one of these, the Spaniards burned a village and a cross was planted because the inhabitants would not obey either the native king or the Spaniards. Magellan went ashore every day to hear mass; many of the new Christians joined to whom he continued to catechize.

One day the queen came and the captain approved of the gift which Pigafetta had made earlier. Magellan once again instructed the king and his people who had been baptized to burn their idols. This on account of a sick brother of a prince who was severely ill for four days and was unable to speak. The captain had the sick man and his family members baptized and burned their idols. On the fifth day, he rose from his bed and could walk.

Magellan and some of his members attempted to subdue the natives of Mactan by force, and in the ensuing battle, the Spaniards were overpowered and Magellan was killed.

The encounter between the natives and the Spaniards resulted in the incipience of a religious consciousness: Kristohanon. And now, after all these five hundred years of Christianity in the country, a people have become more conscious of the wonderful gift of faith to be shared with others—they are gifted to give!

(From the Original text by Fr. Marvin Mejia and adapted and summarized by Ms. Haide Palapar)